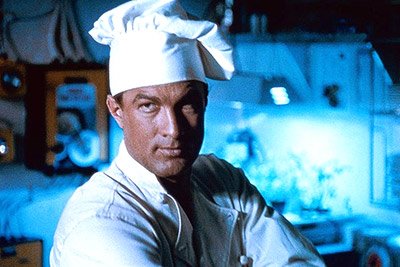 The world needs more creative sci-fi films, so we set ourselves the task of writing an outline for one. Action, violence, war, drama, special effects and an examination into faith and false idols. Oh… and aliens dressed as Erika Eleniak.

It was sometime in the year 2134, in a section of space known as the Inscrutable Zone (donʼt ask me why). It was exactly at this time that a recording was intercepted. A message. This information was travelling at ridiculously high speeds and was gobbled up by the Ropad, a remarkably docile and unassuming alien species who just happened to be within intergalactic earshot.

Via a straightforward linear calculation, the message was sourced back to a very small watery planet a long way away. This tiny world was better known to us, dear readers, as Earth, and the communication hurtling through interstellar space was in fact ‘Under Siege’ starring Steven Seagal as Casey Ryback. An epic thriller set aboard a battleship with lots of nasty terrorists thwarted by a heroic hardened killer / chef.

ACT ONE
The Ropad were a fully sentient biological species that communicated via movement and by emitting a wide variety of pungent odours. What they couldnʼt do was understand English. But this was just a small problem which was eventually solved, by a process of evolution and learning, until one day the Ropad were well-versed in the vocabulary of Casey Ryback, culminating in the creation of the Ryback Basic, a whole new language created solely from the 293 different spoken words of the omnipresent Ryback.
The Ropad revered Ryback. He become a supreme God that they believed must have created the universe. Back on their home world, the cult of Ryback spread rapidly. Entire books were written and their popularity boomed. Statues were erected, paintings of ʻthe Cookʼ, as He was colloquially known, became all the rage. Fashion such as white clothing, bright orange perma-tans and silky black ponytails became mandatory for both sexes.

Jordan Tate was canonised. The Ropad had no sense of the playboy playmateʼs outward appeal to human males, but still saw in her a steely resolute goodness, which eventually formed the basis for the Ropad Recollections, a series of life lessons based off the moral actions of the dual-radiating brilliance of the divine Ryback & Tate.
These recollections were sung reverently in large gatherings and offerings were made to the deities after first chanting their way through various psalms including no.204 ʻWeʼre puppets in the same sick gameʼ no.109 ʻGet My Pies out of the Oven!ʼ and no.188. ʻWhat kind of Babbling Bullshit is this?ʼ All staple mantras of ʻthe Cookʼ.

ACT TWO
But trouble was brewing. A small splinter-faction was spreading doubt over the validity of Rybackʼs claim to divinity. Their belief differed greatly from the orthodox Rybackians. This small subversive element believed that Ryback was an act, and that the true enlightened one was in fact a human called Steven Seagal. They even went as far as to suggest that Tate was also a pretend and completely fictitious entity, and that true worship should be made to the holy Erika Eleniak. Events came to a head when the disciplined but otherwise peaceful Rybackians, were attacked at multiple strategical points across the globe by the more aggressive Seagalians. The Rybackians were completely unready for this heinous move, especially as they deplored the use of guns which the Seagalians were only too happy to use with wild abandon. Thousands were killed, mostly Rybackian innocents. Martial Law was put in motion, but the military were overrun by the growing power of the emerging Seagalian forces. Hardline fundamentalist Rybackians went head to head with the younger more tolerant liberals who argued that although Ryback and Tate hated guns, they still used them when their backs were against the wall. This debate raged on for many weeks causing discord and pandemonium, this hesitant process further weakened the Ryback territory as the Seagalian march continued unabated.

ACT THREE
Eventually the Ryback rearguard were suitably ready and armed with repulsor-shot laser rifles and instructed to shoot to kill any Seagalian. The difference between them was striking, not only in theoretical beliefs but also appearance. The Rybackian uniform was a standard issue White smock, with matching chef hat while the Seagalian dress was casual and highly individual, with some of the more extreme adorning their faces with red lipstick, frizzy blonde wigs and fake plastic breasts. These were often the battle-hardened front line troops who would charge into the fray yelling ʻEleniak!ʼ and ʻDeath to Tate, the pretend harlot, who doesnʼt date musicians!ʼ.
The Rybackian soldiers were no match for the Seagalian onslaught. Through sheer weight of numbers they managed to maintain a foothold, but the battle raged on across the globe for many months, until the sight of grubby white chef corpses splashed with crimson bloodstains was a normal occurrence for all concerned. The Holy War headed painfully slowly towards a stalemate, with neither side capable of overwhelming their opponent. Eventually representatives of both factions met and began reconciliation talks. Over many days they discussed the actions and beliefs that their faith instilled in them, and on one momentous day, after much arguing and debate, the Rybackians and Seagalians agreed a truce.
The war was over and it was agreed that due to the strength and skill of the human called Ryback, the Seagalians must accept that their God can only be a small part removed from their own Rybackian version. Basically, If Seagal is an actor then he probably isnʼt very good. They subsequently shook hands on the basis that their Deities were virtually the same. New statues were erected with the figures of Casey Ryback and Steven Seagal united with one body and two immaculately pony-tailed heads. Similarly, a Jordan Tate / Erika Eleniak statue emerged within the capital city with the same one head but with four perky breasts.

All was calm and peaceful for many centuries. Life and worship continued at a leisurely pace, until the tranquility was broken by the interception of a new message from deep within the Inscrutable Zone.

LEAVING ROOM FOR THE SEQUEL

The whole planet held their breath as the latest communication was watched, listened to and debated until eventually the leader of the United Ropad called a conference. At the gathering, he stepped forward and hushing the masses to a silence, held aloft a decoded box in his hand. He looked at all his followers, his people, and took a deep breath before shouting at the top of his voice “Behold! Doogie Howser….M. D!”