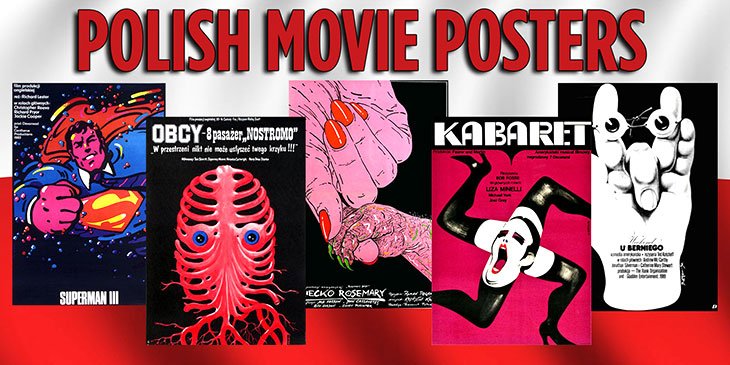 Unique, creative and, at times, plain crazy. Polish movie posters have recently hit new heights in their popularity. Recent showcases at the Iluzjon exhibition and the Museum of Modern Art have pushed these Eastern artistic masterpieces further under our Western gaze. What usually makes a Polish movie poster recognisable? Well they normally avoid any iconic imagery you would expect or associate with the film itself.

During Communist rule, the Polish state-run film industry rejected Western ideas and their promotion and marketing ideals too, resulting in the training and specialization of the Polish movie poster artist. These young artisans were commissioned to create striking, unaffected posters for all our memorable western films. Expressive, surreal and unrestrained.

The Polish artists often had no legal reason to use photography or the actors in the design, often the leading stars didn’t even get credited. Sometimes the artist had never even seen the film or any imagery contained within it. The results were designs which conveyed the essence of the film with complete artistic freedom.

Here are some of the best Polish movie posters…

The Shining (1980)
by Leszek Kebrowski The Blues Brothers (1980)
by Andrzej Krajewski Raiders of the Lost Ark (1981)
by Miroslaw Lakomski Star Wars The Empire Strikes Back (1980) The Muppet Movie (1979)
by Waldemar Swierzy Here are some of our other favourite Polish movie posters;