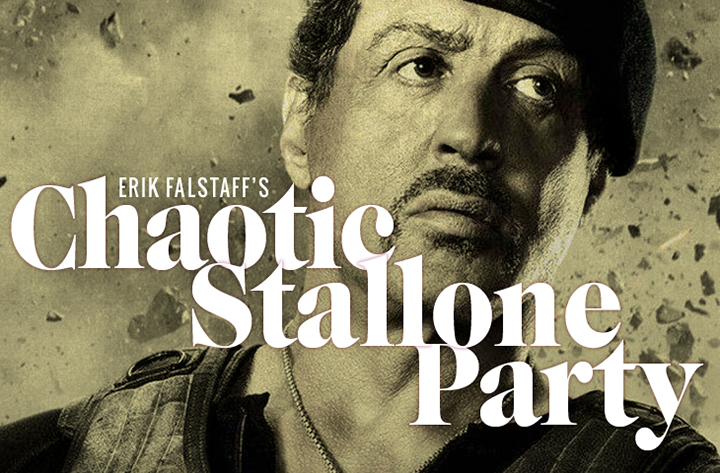 To celebrate another Sylvester Stallone action flick (Bullet to the Head), we told our intrepid man about town Erik Falstaff to “head to L.A. and find out what you can about Stallone”. This is what happened…
The party was in full swing, the room was filled with famous people. Napoleon Bonaparte, C3PO, Wonder Woman, Harry Potter…But things were getting out of hand fast. This evening always had the potential to go tits up, and it was about to happen. Tensions were high and now, worse…Wesley Snipes had been spotted hiding by the bins. But i’m getting ahead of myself. I’m starting this story towards the end, rather than the logical place, i.e. the beginning.

I had arranged a get-together in Downtown L.A. An evening for people who have worked with Sylvester Stallone to get together and reminisce and share their anecdotes and opinions on the man. Invites were sent, food was prepared, Tuscanyʼs finest wines were ordered and I even managed to get a DJ on the cheap – A Paraguayan with an eye patch and a homosexual fixation with Tom Selleck. We lured our guests in with promises of cheese strings, heroin and Karaoke. A winning combination. I had delegated everything to others, so that I could better prepare myself for the evenings exertions and well, because I could. But replies and demands kept coming back. The main problem was Snipes, who wanted an entire room to himself, enough space to fit, both, his meditation chamber and 60 Puerto Rican farmers. I had some experience with Snipes. I had met him briefly during the Highland Games in 2001, when he took exception to me wearing clothes and threw a paddy for two solid days because his jacuzzi filled with homogenised milk had turned yoghurty. There was no way he was coming in. I had extra security on the door and snipers hiding upstairs armed with semi-automatics and rubber-bullets. I also took the precaution of employing two Nepalese Knife-fighters, who prowled the shrub-beds outside with childlike innocence and sadistic intentions. I had wanted to weld the door shut once everyone was inside, just to make sure, but I was warned this was a fire hazard and Kurt Russell might panic because of his experiences on Backdraft.

The room was filling up nicely. It was a fancy dress party just to make things slightly more interesting, hence the appearance of Harry Potter, who was in actual fact, a pissed-up Harvey Keitel complete with round glasses, head scar and what he claimed was ʻFloo Powderʼ.

My assistant Rueben had the job of keeping me discreetly informed of any problems. I told him that if Snipes showed up he was to rush in and place a slice of ham over his own face and leave it there. This was the signal.

I started to shuffle my way around the busy room and the bizarrely attired guests with a bottle of Pernod in one hand and spraying an aerosol that smelt of McDonalds in the other. It was what they use in their restaurants to make everything smell the same and was Marlon Brandoʼs favourite deodorant.

I made my way over to the corner of the room past Dolly Parton dressed as Wonder Woman where I discovered Mr. T sitting on his own at a little table eating sausage rolls from two plates. He glanced up at me guiltily over the mountain of food. It was then that I noticed he was dressed as the Dalai Lama. “The Dalai Lama?” He spoke with his mouth full and it made me want to be sick.

“No dammit! Stallone” I snapped back.

He popped another couple of sausage rolls into his mouth and shrugged. “Iʼm just here for the food, fool.” cheeks puffed out like a deformed beast.

I shook my head in disgust and slowly began to move the tray of sausage rolls from under his watchful gaze. We watched each other carefully as I removed it completely and backed away. “Where you going with those?” He asked with a worried frown. I pointed at him “Youʼve had enough B.A.” I wagged my finger at him warningly “YOUʼVE… HAD…ENOUGH.”

Brigitte Nielsen was an early casualty. I had assumed the lump next to the buffet was a large travel blanket, but I was very wrong. She had been laying on the floor for some time before someone pointed her out. We pronounced her dead just after 7pm, but by 8pm she’d got the bus home.

It was only after this that I realised our mistake. Not putting Brigitte Nielsen in a body bag when she was still alive, but worse…we had ʻFactionsʼ. One side of the room was Pro- Stallone, the other was clearly Anti-Stallone. Insults were becoming common, along with rude gestures and terrible impersonations. John Lithgowʼs Hulk Hogan impression was so bad it was good. Even Harvey Keitel laughed. But Hogan (dressed as Charlie Brown) wasnʼt impressed and angrily threw his chocolate bombé across the room where it exploded over Lithgow, completely covering him and his C3PO outfit. “You fucking Ferr—reak!” He screeched. It silenced the room like a loud fart. It was a strange thing, C3PO swearing. It mesmerised everyone. Apart from the huge mutated Charlie Brown who squared up angrily to Lithgow, towering over him. A colossus; like Hercules in a Christmas jumper.

“Ordinary!” Lithgow snapped back “Since when does anyone ordinary have $180 million dollars?” He shouted, glaring at his opponent.

“Well what about her?” Lithgow asked pointing to a small woman standing next to him dressed as the pink panther.

“Huh? What about her?” Hogan replied

“She was fired as his housekeeper for looking at him!” Lithgow screamed, stopping all the background arguing and murmuring.

“Thatʼs because of the lasers.” A small voice called out.

The whole room turned and sought out the originator of the voice and standing there in the corner was John Travolta dressed as Rasputin. “Itʼs true. Lasers. People can shoot you with lasers through their eyes now.” He mumbled. There was an outbreak of angry shouting and jostling. “Itʼs been proved.” He shouted.

I had to do something to calm the situation, I was fully aware that, if not, innocent Hollywood stars could be killed, maimed or eviscerated with toasting forks.

“Shut the hell up, Travolta. Thatʼs Scientology bullshit!” I roared.

It wasnʼt the most eloquent of lines, or the most advisable as immediately a full huge bowl of apricot trifle was hurled across the room and burst all over him. He staggered back, a straggly bearded, custard-filled lunatic. He went for the salmon and hefting it up with both hands threw it with a grunt. It flew through the air and we all watched, as if in slow motion, as it slapped audibly across Steven Berkoffʼs face.

And then it all went off. Everyone was throwing things. The ceiling was hidden from view and the room darkened as hundreds of foodstuffs blotted out the lights. And then as I hit the floor in an Israeli Kras Mata defensive manoeuvre, I managed to peer up and catch sight of a man with a slice of ham laying across his face. I shouted something that made no sense “Snipesiscomeeengkrap” or something like that as I forward rolled between Sandra Bullocks legs and came bouncing up, leaping like a 14-year old Ukrainian Gymnast into the path of a shocked-looking Pelé (dressed as the bad guy from Dirty Harry), who I shoved out of the way until he fell backwards and landed ass-first in the punchbowl. He just had time to take this in before an large french stick hit him and completely took him out. Mr. T as the Dalai Lama and Carl Weathers as Barbarella were facing off and bobbing around in front of each other snarling insults, fists up and imminently going to start beating the living shit out of each other. Things were looking grim, which is where, funnily enough, this story started…

I watched aghast as they began to grapple and as they grunted and scuffled, there was a loud ripping sound, and the bright orange curtains that made up the Dalai Lama outfit come free, Barbarella threw the offending material on the floor and attacked a now naked and flabby Mr. T with renewed force.

I turned and hurried to the window, evading the incoming Curly-Wurly and peered out into the nighttime gloom hoping not to see anything that resembled Wesley Snipes. Above the fighting noises filling the room I could just make out Mr. T telling Carl Weathers to “Watch out for my hips ʻcos those fuckers donʼt replace themselves.”

There was a flash of something metallic from outside and I naturally recoiled, which was just as well as next thing there was a massive explosion as the entire window caved in. A huge metal object burst through in the room. A good half a ton, it landed with a thump on the buffet table and bounced to the floor before rolling to a stop. It resembled an escape pod from Star Wars, especially when a chocolate-covered C3PO came forward and touched it inquiringly.

I stared in shock at the offending lump of metal, the same as everyone else in that room, and then it dawned on me. It came to me in a flash just what was….

“Itʼs a fucking meditation chamber!” I roared at the top of my voice…”Breach!” I screamed. Then the figures started to pour in through the broken window. Bette Midler threw herself in, along with all the other overly-demanding divaʼs, and then with a sinking feeling I realised what was going to happen next, as the metal chamber hissed open, steam pouring out into the air as the meditation chamber burst apart and out jumped Snipes, the fiend, heavily disguised as Saruman the wizard. The food fight was still in full swing, and I could think of no good reason why that shouldnʼt include Wesley Snipes, so I attacked him with a giant stuffed crab. This obviously wasnʼt the first time he had been bullied by a crustacean, as he parried the blows with extraordinary ease. He had clearly been training much more than I had, and I was on the verge of keeling over and pretending to be dead when from out of nowhere Kurt Russell popped up from the floor and jabbed Snipes in the face with a cocktail stick. I took the opportunity to throw myself towards the door and as I grabbed the shaking figure of Rueben, who still had the ham across his face, I shouted out for the snipers and run straight out of the building and into the garden.

But we were followed. Saruman / Snipes had somehow evaded the laser-sighted marksmen and stood framed in the doorway. An eerie wizardy silhouette. We were exhausted, and our opponent was fresh and looking quite potent. I did something next which any man would have done in a similar situation. I grabbed the slice of meat from Ruebenʼs face and flung it forcefully across the garden at Snipes, yelling at the top of my voice “HAM FACE!” and then we run..we legged it to the car.

As we made our getaway through Los Angeles, sirens blared and emergency services flashed past heading towards our previous destination. We pulled over and we sat there in a McDonaldʼs car park trying to get our breath back amidst a prolonged silence. “So did you find anything out about Sly?” I asked eventually. He shook his head and tears showed in his eyes. I patted his shoulder “Donʼt worry yourself, weʼll be fine. Weʼll make something weird and wonderful up. Itʼll be great.” “Like what?” He asked quietly.

“I dunno. Iʼll say I went sky-diving with him. Went fruit-picking in Catalonia. Something like that.”

He nodded. “How about a crazy pointless party?” He asked.

I looked at him and become aware of just how much he smelled of cooked pig. “Precisely.”