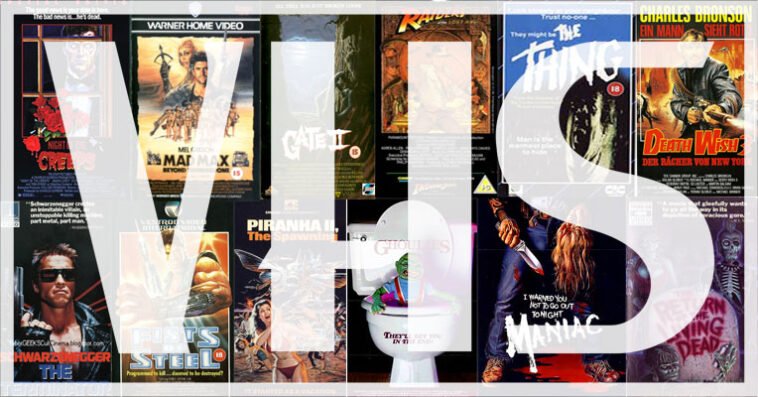 In today’s age of technological innovation, where Netflix, iTunes and others have made sure that you’re never more than a click away from watching a movie, We take a look back at the format that started it all. The humble ‘Video Home System’ or VHS.

First video cassette player launched in the UK in 1978, was the JVC HR-3300EK, costing £799, which in todays money is whopping £3880. Although, as with most new tech, it started to slowly come down in price which kickstarted a cultural home revolution. For anyone reading this who was born in the mid 90’s onwards, you don’t know what you missed. At the beginning of the 1980’s, the UK had 3 TV channels (our forth channel, imaginatively called ‘Channel Four’ started in November 1982), there was no satellite or cable, just 3 channels. At just before midnight, they would all turn off for the night, signalling to the population that it’s bedtime.

Back in this bygone era, if you missed an episode of your favourite TV show, well, that was that, as it wouldn’t be repeated. When VHS arrived, it allowed people for the first time to never miss their favourite program, with average Joes up and down the country feeling like rocket scientists when you actually managed to program the video to record something whilst you were down the pub. The glow of the video player’s standby light through the curtains also become a beacon to burglars everywhere, resulting in house alarm sales tripling in the early 1980’s. The history of VHS is also intertwined with the boom of video rent shops. Video shops popped up on almost every corner of every town, you were never more than a 5 minute walk away from at least 2 of them. The video shop was an almost magical place, filled by racks and racks of boxes covered with amazing movie artwork. If a video was available for rent, there would be a slip of card poking out the top of the box, which you’d take to the counter, sign and walk away with your cassette. It was always a nightly rental, and shops had to stock up with the latest releases, which cost them around £80 for each cassette at wholesale prices. With the release of a high profile movie, the shop would be packed on a Friday night, with people desperate to get their hands on one of the 20 or so copies on the shelf before they disappeared. I remember taking my Nan for the first time to choose a film to watch on a Sunday afternoon but after walking round for a few minutes, she explained that she couldn’t see how a whole movie could fit in a tiny box and promptly walked out.

New technology wasn’t for everyone

As home usage continued to rise, some film studios at first held back from making all of their old catalogue classics available for the rental market, fearful that video would kill off cinema attendance, and that the lucrative theatrical re-releases would be a thing of the past. (They would regularly re-release high-earning movies like ‘Gone With The Wind’ or ‘Star Wars’ back into cinemas to cream off some extra coin.) This resulted in a huge glut of b-grade Star Wars knock-off’s flooding shelves, where the original’s still wasn’t available (although I do remember ‘A New Hope’ being shown on television every Christmas day for years throughout the 80’s.) VHS wasn’t without it’s competition, which had previously arrived in the form of Sony’s Betamax format back in 1975 and which was a descendant of the format TV studios across the world used to broadcast shows. Betamax initially had only a one-hour recording time, compared to VHS’s 2-hour, but Betamax boasted slightly better picture quality.

VHS managed to get a stranglehold on the video production market, driven by falling prices of VHS hardware, the porn industry’s stamp of approval, and in the UK, by Thorn EMI, who owned a chain of video rental stores and produced their own Ferguson video player, an affordable piece of kit which helped to drive VHS into the UK’s warm embrace. Sony eventually relented in 1988, producing its own VHS player, which marked the end of Betamax. This would be repeated in the 2000’s with the Blu-ray vs HD-DVD formats, although this time Sony had the advantage in the PS3, which got the format into living rooms faster. As home rentals started to take off, the Studio’s began to realise that VHS could breathe new life into movies which had under-performed at the box-office. 1980’s ‘The Shining’ slightly disappointed at the box-office but went on to do big business within the home market. Blade Runner was another movie that found a cult following on VHS, along with John Carpenters ‘The Thing’. Other issue’s that studios had with the viewing public watching movies at home was a potential drop in cinema attendance, which had already been declining through the 60’s, 70’s and early 80’s, dropping to a new low of 54 millions visits at UK cinemas in 1984. This was heralded by some as the death-knell for UK cinemas, but VHS actually started a rally of film popularity, which in-turn spurred movie studios and cinema owners into looking to give the customer something more than a smelly, dank fleapit.

The first modern multiplex arrived in Milton Keynes in 1985, most cinemas previously had one or two screens, sometimes showing the same movie on both. Pre booking seats wasn’t an option, so you had to arrive at-least one or two hours early and queue with many hundreds of others, hoping that you’d get to the ticket office before the theatre was full. Multiplexes changed all this by offering an array of films over 10+ screens, better sound and vision, nicer seating, and a better snack area. They felt almost space age in their design. The multiplexes pretty much killed off most smaller cinemas, many being knocked down as the continuing sign of progress.

Another big change for the video industry started in 1982, and it began with an article in the ‘Sunday Times’ by Journalist Peter Chippindale, titled “How High Street Horror is Invading the Home”, which basically bemoaned that “uncensored horror video cassettes have arrived in Britain’s video shops, with extreme violence replacing pornography as the video trade’s biggest money-spinner”. The head of the Obscene publications squad soon followed up with “It used to be drink, smoking and drugs, then porn, and now there’s horror” Mary Whitehouse’s ‘National Viewers and Listeners Association’ – a self appointed group of do-gooders, backed by the Daily Mail – began the backlash against VHS and wanted these bad influences banned forthwith. It didn’t take much for the newspapers to whip up a frenzy, which then turned into a full blown panic. The tipping point came when an 18-year old called Martin Austin was found guilty of two counts of rape and several counts of burglary in May 1983. During the trial, he stated that “I got the idea of the rapes from a so-called video nasty”.

This was the spark that the papers and Whitehouse had been waiting for, not helped by Austin’s mother weeping to the press; “These films helped destroy my son’s life, they must be banned before another boy’s innocent mind is infected by them” What the press failed to make the public aware of, was that Austin had been diagnosed as emotionally disturbed long before he’d seen the videos, or that he had the I.Q. of a house-brick. The Daily Mail had a field day, demanding that such filth be banned immediately. The government decided to act. By the beginning of 1984, The Obscene Video Recordings act was passed into law and a crack squad of lackeys complied a list of movies to be made illegal under the act. Some of the more memorable movies that fell fail of the law was; The Burning, Cannibal Apocalypse, Cannibal Ferox, Cannibal Holocaust (there’s a theme here I think?), Driller Killer, The Evil Dead, I Spit on your Grave, The Texas Chainsaw Massacre, The Exorcist and ‘Last House on the Left’.

In February 1984, the first person was convicted under the act, David Hamilton-Grant, got 6 months in prison after dozens of copies of ‘Nightmare in a Damaged Brain’ were found in his possession by the Obscene squad. Esteemed movie critic of the time, Derek Malcolm, found himself in court defending the film, commenting on its technically proficient use of camerawork, the judge didn’t buy it stating “the German tank invasion of Poland in 1939 could be described as well executed, but it doesn’t make it right”

The ultimate job of policing film releases in the UK had always lay with the BBFC (British Board of Film Classification), who now had to oversee the home video market as well. The man in charge was the notorious James Ferman, a strict unforgiving type who resided over the BBFC from 1975 until 1999. Not only were certain films banned outright, but a raft of changes swept through the whole UK movie market. He was famous for hating Nunchaku’s, making the producers change the TMNT title to ‘Teenage Mutant Hero Turtles’ and some of Bruce Lee’s most iconic fight scenes involving the weapon were removed from releases.

This marked a shift in the video market, with classifications tightening up, and even TV airing’s of movies shown after the 9pm watershed not exempt from his long reach, (Die Hard’s famous line being butchered to “yippee ki yay kemo sabe’ and many scenes just cut completely out, making viewing bloody painful at times). The shift continued with movie studios realising that money could be made from sell-through tapes, which started to appear in HMV and Virgin Megastore’s, encouraging a generation of movie fans to buy their favourite films without the ad breaks and iTV’s incessant cutting.

In 1991, Pioneer announced a new format they had invented called ‘Digital Versatile Disc’ or DVD as it became known. The little shiny disc would do to VHS what CD’s did to vinyl and cassette tapes before it. In 1997, the first DVD player (the Thompson DTH1000U) hit the high street and VHS’s fate was set. By the end of the 90’s smaller video shops had started to close, leaving the bigger chains like Blockbuster to mop up the rest. You can’t halt the march of technology they say, and as I’m sure everyone would agree, DVD and now Blu-ray are superior in every way. But the allure of VHS will always live on, regardless of fiddling around with tracking buttons, having to rewind rented tapes before watching because the previous viewer had ignored the big ‘REWIND AFTER USE’ label and the occasional tape getting chewed up inside the machine.