Its been 9 long years since Robert Rodriguez and Frank Miller brought the excellent Sin City to the big screen and now we get to go back to Basin City in the eagerly awaited sequel; Sin City: A Dame To Kill For. 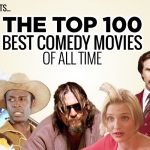