With 2015 over halfway through, we take a look at some of best new movies that are worth looking forward too over the next 5 months…

A biopic based on the legendary rap group NWA and their rise from the streets of Compton, Early reviews are just coming out and the buzz is pretty epic. 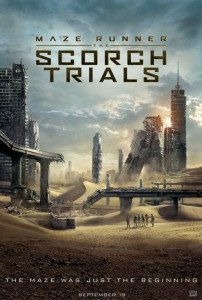 The sequel to The Maze Runner is nearly here, the first movie was fairly solid for Teenie fiction with The Scorch Trials looking to up the action.

With Vin Diesel playing a badass witch hunter, i think we have to give this a chance…right?? Here’s the trailer…

Pixar are finally doing their dinosaur movie, with an interesting spin… “what if the asteroid that wiped out the dinosaurs never happened and man and beasts end up living together”.

Starring Johnny Depp and Benedict Cumberbatch, Black Mass is based on the true story of Whitey Bulger, the brother of a state senator and the most infamous violent criminal in the history of South Boston, who became an FBI informant to take down a Mafia family invading his turf.

Based on the true story of French high-wire artist Philippe Petit’s attempt to cross the Twin Towers of the World Trade Center in 1974. Starring Joseph Gordon-Levitt and Ben Kingsley and directed by Robert Zemeckis, the early buzz is extremely positive, with Levitt’s performance being singled out for special praise.

Based on the 60’s TV show, this cold-war romp see’s Henry Cavils’ CIA agent and Armie Hammers KGB operative join forces to fight a mysterious criminal organisation. Trailer looks good and it’s directed by Guy Richie, so got to be worth a look…

The reboot of the Fantastic Four is nearly here, with director Josh Trank (Chronicle) calling the shots, the reboot takes a more serious grounded approach over the slightly camp earlier versions. This is the last of the summer blockbuster superhero movies, so gotta be worth a watch…

Based on the excellent novel by Andy Weir, The Martian tells the story of a manned mission to Mars where astronaut Mark Watney is presumed dead after a fierce storm and left behind by his crew. But Watney has survived and finds himself stranded and alone on the hostile planet. With very limited supplies, he must draw upon his ingenuity, wit and spirit to subsist and find a way to signal to Earth that he is alive. Starring Matt Damon as Watney and with Ridley Scott in the directors chair, this could be a HUGE movie…

The final instalment of the The Hunger Games series is nearly upon us with Katniss gearing up for a full-on revolution against the Capital.

Guillermo del Toro brings us his dark vision of a gothic romance starring Charlie Hunnam, Tom Hiddleston and Jessica Chastain. In the aftermath of a family tragedy, an aspiring author is torn between love for her childhood friend and the temptation of a mysterious outsider. Trying to escape the ghosts of her past, she is swept away to a house that breathes, bleeds…and remembers. The preview footage at this years Comic-Con went down a storm.

With Steven Spielberg back in the directors chair for the first time since 2012’s Lincoln, Bridge of Spies tells to the story of an American lawyer who is recruited by the CIA during the Cold War to help rescue a pilot detained in the Soviet Union. Starring Tom Hanks and Alan Alda.

Quentin Tarantino delivers his next opus set in a post-Civil War Wyoming, where eight bounty hunters try to find shelter during a blizzard but get involved in a plot of betrayal and deception. Will they survive?

After the brilliant Skyfall, Bond is back and on the trail of a shadowy organisation codenamed SPECTRE. With the excellent Christoph Waltz as the villain (Blofeld perhaps??), could this be the best Daniel Craig outing yet?

The one most of us are waiting for… and its getting closer. JJ Abrams is bringing back the magic of a galaxy far far away and hopefully removing all memories of the prequels at the same time. If you havent seen the trailer already, check it out below… Awesome.