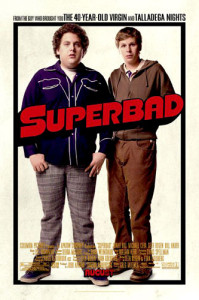 Teen comedies are a dime a dozen, for every good one, there’s a ton of shit. That’s why Superbad deserves its place at number 9 in our countdown of the top 100 best comedies, as it’s a work of pure genius. The story is as old as life itself: The pursuit of sex. Two High school seniors, Evan (Michael Cera) and Seth (Jonah Hill) are on the verge of graduation, all they really want is girls and to be popular. This may seem like a cliché teen movie, but you’re wrong. Seeing an opportunity to gain some social points, they offer to get some booze for an upcoming party using a fake ID. What puts Superbad above other teen comedies is the central trio of characters and the performances of Hill, Cera and, in his first screen performance, Christopher Mintz-Plasse, who being just 17 at the time of filming, had to have his mum present, although she was the one who convinced him to try for the role. It’s one of those movies that no matter how many times you watch it, it’s still hilarious 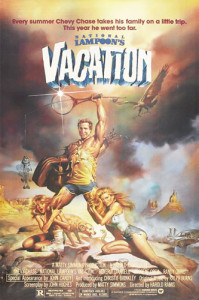 Chevy Chase may have made his fair share of stinkers, but in the role of stressed-out schmoe Clark W Griswold he found his calling. Directed by Harold Ramis and written by John Hughes, the story takes the frontiersman bodily heading west of old and gives it a modern update. Chase’s Griswold is like an early Homer Simpson, who piles his family into the station wagon in pursuit of a proper family holiday, with the final destination being Wally World, a Disney-lite theme park. It all turns into fiasco, punctuated by brilliantly executed set-pieces, but the real comedy is how ordinary folk will go to such lengths in the quest for fun, and at Dad’s everywhere who suggest such madness in the first place. Although Clark Griswold is the fuel firing the engine, the whole cast are note-perfect and even at 31 years-old, it’s still a riot. 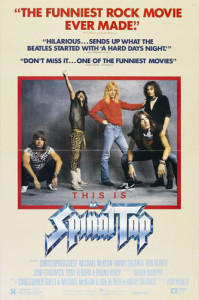 Nigel Tufnel, David St. Hubbins and Derek Smalls. They are ‘The Tap’ and they’d like to rock you. Cameoing himself, as the documentary’s director, is Rob Reiner playing Marti DiBerg, who’s trying to capture the sounds and smells of Britain’s loudest band during their disastrous ‘Smell The Glove’ comeback tour of America. There’s so much comedy gold here, from the bands hilarious antics, to the songs themselves, there’s also a wealth of small details that becomes more apparent every time you watch it, like Billy Crystal and Dana Carvey’s ‘mine-is-money’ waiters or Tufnel’s perpetually confused look. Michael McKean, Christopher Guest and Harry Shearer largely improvised the dialogue, with huge chunks of excellent material that ended up being cut from the movie now available as bonus content on the DVD/Blu-ray editions. 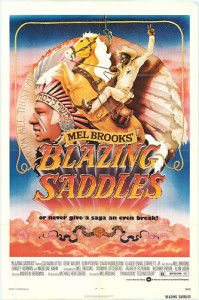 As we mentioned previously with Young Frankenstein, Mel Brooks was the king at poking fun at movie genres, with his attention his time turned to westerns. Blazing Saddles was his low-brow high-point, a career best, with Brooks filling out the cast with clichéd characters that could easily have spun the whole thing off the rails, but instead work. It’s not subtle, with gags galore, but they hit the spot, the movie nearly loses the plot towards the end with the ‘movie within a movie’ but Brook’s just manages to keep it all going. Without Blazing Saddles, there’d be no Airplane!, no Farrelly Brothers and no Judd Aptow. Mel Brooks broke ground with Blazing Saddles and it’s still a side-splitter. 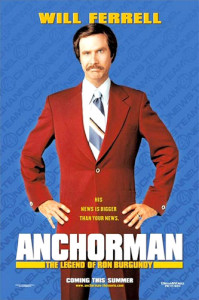 When Anchorman was first released, it didn’t set the world alight, getting mixed reviews and only getting a so-so box office take, but Anchorman is one of those movies that needs a second viewing, because it gets better every time. The plot is thin and occasionally disjoined, but Will Ferrell IS Ron Burgundy. The gags come thick and fast, with only the odd one missing, but the film is breezes along from set-piece to set-piece with director McKay just letting things flow organically. The film is populated with some of the daftest and most random characters, quips and story-lines, which makes it hilarious to watch, even if they are just sitting around singing a song, fighting to the death with rival news stations or just hanging out at a party, there’s always a laugh to be had. The story is the exploration of the rampant 1970 misogyny that was a staple of the era, with only men allowed to read the news, and looks at the way a women can upset the applecart, but really it’s a showcase for Ferrell and friends, who largely improvised the dialogue as they went along. It really was a case of catching lightning in a bottle, as they proved with last years sequel, which didn’t manage to hit the same mark. 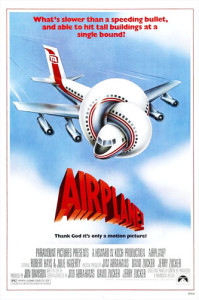 If Blazing Saddles started the trend for low-brow comedy, then Airplane turned it into an art form. Zucker, zucker and Abrahams were weaned on the Marx Brothers, Woody Allen and Mel Brooks and Airplane! Was their first directorial effort. Although parodying the 70’s trend for big budget disaster movies, Airplane! got most of it’s inspiration from the 1957 film Zero Hour, with the crew coming down with food poisoning and an old war pilot having to take control of the plane and being talked down by a captain on the ground, even some of the character names are the same. But where they shifted there attention was to add gloriously stupid schoolboy humor from the opening reel to the closing credits. They chose serious actors for the roles, with the golden rule being, everyone has to play it straight. Even Leslie Neilson, wh went on to make a career of comedy was at the time a serious TV actor, with the casting director nearly quitting when the Zuckers insisted on him for the role of Dr. Rumack. The style of pile ‘em high, sell ‘em cheap gags has been done to death since, but Airplane! is still the king, with so much going on in nearly every scene. There was no improvising allowed, with Lloyd Bridges trying to make sense of his dialogue and offering constant suggestions, until Robert Slack said “Lloyd, nobody’s watching us anyway; spears are flying into the wall, watermelons are falling from the ceiling, just keep talking”. Airplane! went on to be a big hit and still has enduring appeal. 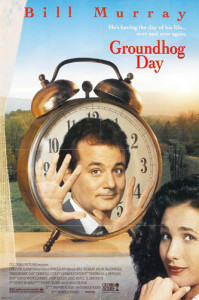 Local weatherman Phil Connors Murray is in hell, well technically he’s in Punxsutawney, Pennsylvania for the annual Groundhog Day festival, but it might as well be hell. Why? because he’s been cursed to live out the same day over and over and over again. Wisely, no-one ever feels any need to explain the how’s or why’s of Phil’s 24-hour running loop, they just get on with strip-mining every possible gag from the situation. With Murray sniffing a once-in-a-lifetime juicy steak of a role, he sinks his teeth in and chews till his gums bleed. Course, this being Hollywood redemption is a must but before it dissolves into sentimental melodrama, we get what Bill Murray does best, merciless axe wielding sarcasm with the dial set to 11. Murray turns Phil into a snarling, irresistible monster, producing something truly stellar. 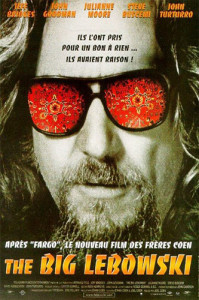 The Coen’s lightened up after 1996’s Fargo by creating one of the best loved of all film characters. Jeff “The Dude” Lebowski, a scruffy, white Russian drinking, loveable old hippy, who after a busy day smoking pot, enjoys unwinding with his buddies Walter (John Goodman) and Donnie (Steve Buscemi) down at the bowling alley. The Dude gets roughed up by some goons working for a porn producer, who mistake him for a different Jeff Lebowski (who’s also millionaire) and they also piss on his rug. The Dude decides to seek reparations and so follows a slapdash mystery with conspiracy theories, kidnap clichés, a cringing cremation, Eurotrash nihilists and even a psychedelic dance number. The film works so well due to the first-rate performances by Bridges, Goodman and Buscemi, with Goodman’s slightly unhinged Walter leaving a lasting impression. Although John Turturro’s cameo as a two-bit bowling slime bag Jesus Quintana has to get an award for best ever cameo, uttering the line “You pull any of that crazy shit with us, you flash your piece out on the lanes, I’ll take it away from you and stick it up your ass and pull the fucking trigger ’til it goes click” Timeless fun and the Coen’s at their best. 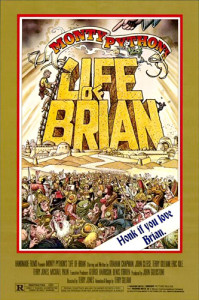 During their time with the BBC, the pythons only unanimously censored themselves once. The cause? A Terry Gilliam animation which featured a close up of Christ on the cross, complete with hammering sounds. Pull back to reveal… The cross as part of a Telegraph pole, with an engineer busy clanging away repairing something. In 1978, just as the team where set to fly to Tunisia to film their third feature, backers EMI pulled out, fearful of rumblings about ‘blasphemy’ in the script. To the rescue came George Harrison and his indie production company ‘Handmade Fims’. More than anything, George was keen to get it made as he “just wanted to see another Monty Python film”. What the Python’s didn’t realise, was that George and his Business manager both put their houses up as collateral against the money.

On Life of Brian’s release, EMI’s doubts were confirmed. In the UK, it was passed by the BBFC but banned by many councils, with John Cleese and Michael Palin found defending the film on high-brow talk shows. In the US, the reaction was even stronger with blanket bans across many of the southern states. What was lost at the time and still holds true, is that it’s the Python’s most consistently funny film. More deliberately structured than their earlier work, it’s an near perfect example of how to drive a point home with humour. The point being; blind faith is dangerous, question leaders, think for yourself. With few of them having seen the film, the banner waving masses failed to see the irony. With one council leader declaring “You don’t need to see a pigsty to know that it stinks”

It’s a story of one Brian Cohen (Graham Chapman), a contemporary of Christ, who, after getting involved with the People’s Front of Judea (not the Judean People’s Front) is mistaken for the Messiah, caught by the Roman’s and crucified (at the same sitting as Jesus). The most effective bits are the new takes on key biblical moments; like the Sermon on the Mount, as seen by a group too far away (“Did he say ‘Blessed are the cheese-makers?’”), a public stoning complete with a concession stand (“Two flat big ones, five little sharp ones”), and of course, the sing-along crucifixion, soundtracked by Eric Idle’s Always Look on the Bright Side of Life.

Thankfully the froth has now settled, and it’s an – if not THE – essential comedy for any respectable home collection.