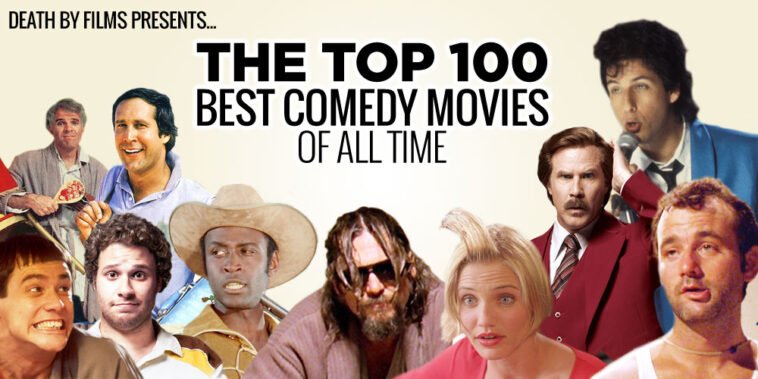 As actor Edmund Kean once said, “Dying is easy, comedy is hard”. With laughter being the staple of happiness, we bring you our top 100 best comedy movies of all time. Gene Wilder and Richard Pryor star as two friends framed for a bank robbery who end up serving 125 years in a backwater prison. Although it’s formula has been repeated to death since, it’s the brilliant improv between Wilder’s manic jitter and Pryor’s hangdog bag of nerves which still make this funny. Set in 1981 at Camp Firewood. It’s the last day before everyone goes back to the real world, but there’s still a summer’s worth of unfinished business to resolve for the camp’s counsellors before the day ends. A mid-life crisis plagued man and his friends find renewal and purpose on a cattle driving vacation. Brilliant turns from Billy Crystal and Jack Palance make this one of the best comedies from the 90’s. After a bitter divorce, an actor disguises himself as a female housekeeper to spend time with his children held in custody by his former wife. Robin Williams was never better than this role. Still laugh out loud funny in places. Although equal parts horror and comedy, Peter Jackson’s first feature film, produced on a tiny budget of $25,000 and shot in Peter’s hometown in New Zealand, is still a blast. The plot revolves around the population of a small town that disappears and is replaced by aliens that want human flesh for their intergalactic fast-food chain. One of the classic 80’s comedies, nerds Gilbert and Lewis start their freshman year at college only to get picked on by some jocks of Alpha Beta fraternity. They decide to put their brains to use and fight back. The movie that made Tom Cruise a star, made everyone want to own a Porsche 928s and wish that they could all sleep with a hooker that looks as good as Rebecca De Mornay. Adam Sandler is best when playing a character with problems, and in The Wedding Singer he hit his career high. He plays Robbie, a singer who along with Julia, a waitress, are both engaged to be married but to the wrong people. Fortune intervenes to help them discover each other. Still excellent. Hugh Grant may not be everyone’s cup of tea, but his flopish ways completely convince you that he’s just a normal guy who’s banging a movie star. Julia Roberts also brings her A-Game, even though she’s sorta playing herself, you can’t help but end up liking her. A career high from Hugh Grant. Peter Sellers was a comedy god and although not his best work, the Pink Panther films are still worth a look. The story starts when Charles Dreyfus threatens to destroy the world with a doomsday device if Inspector Clouseau is not killed. Naturally, this is far harder than it sounds.